It’s the middle of winter here now, so let’s start off with something that happens much more in the summer here. 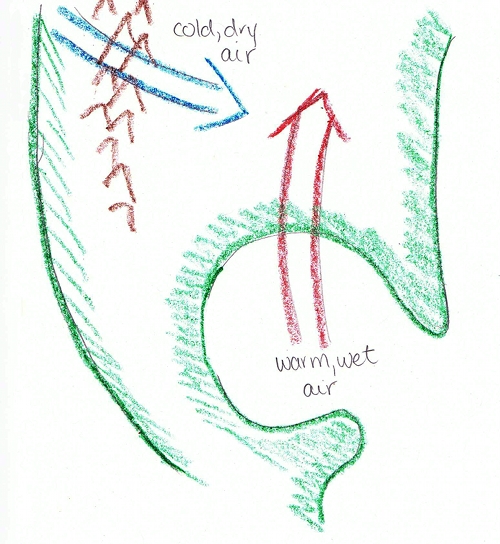 Warm air blows over (say) the Gulf of Mexico, picks up moisture, and then continues on into the Southern US, where it may form a thunderstorm. This warm, wet air is typically close to the planet’s surface — it picks up the water from the ocean, and does not rise very high (yet). This low, warm, wet air may encounter cold, dry air from the Rockies. If this happens, the warm wet air will be lifted up by the cold air, and the moisture in the air will condense into a cloud. 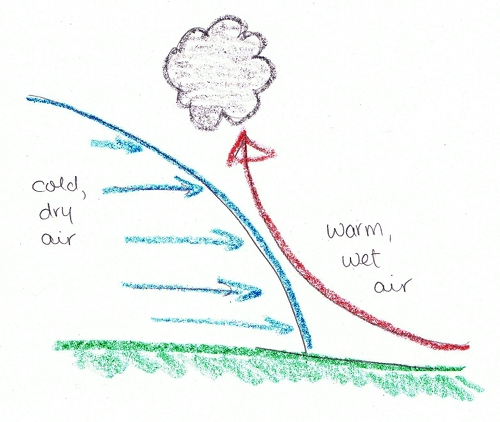 The cold air, which is dense, can slide under the warm air, lifting the warm air up overtop of the cold air, taking the moisture with it. As the moisture rises, it cools and condenses into clouds. The more sharp the difference (both warm/cold and wet/dry) between the two air masses, the more vigorously the warm air lifts, and the larger the cumulus cloud that forms as a result. This lifting motion is called an updraft, and is a central mechanism to the formation of a thundercloud. As the updraft gets stronger and stronger, due to increased interaction between the warm and cold air masses, the cloud gets taller, until it hits the tropopause. The tropopause is like a lid within the atmosphere, and weather formations for the most part cannot cross over the tropopause. When the could hits the tropopause, it cannot go any higher, so it spreads out, forming an anvil shape.

The shape of clouds as they spread laterally is determined by the direction of the horizontal winds, so the anvil points in the direction of the wind. The spreading cloud is concentrated at the top of the cloud because the winds are faster there than they are at the base of the cloud, and so push the moisture quickly outwards. This means too, that the anvil points in the direction that the winds are blowing (and thus the thunderstorm is moving).

As this is happening, the incoming cold air still has to go somewhere, and there’s nowhere for it to go but down. This flow creates a downdraft, and it usually occurs on the trailing side of the thunderstorm. This downdraft pulls cold air underneath warm air, which cools the warm wet air just above it and causes significant precipitation.

A very strong downdraft can form into a downburst or a microburst (depending on the size of the area affected). Bursts form on the trailing edge of thunderstorms, and are characterized by very quickly sinking air that spreads out in all directions when it hits the ground. They can cause a lot of damage, and all the damage occurs in straight lines radiating away from the site of the burst; there is no swirling motion like there is in a tornado.

Hail is often associated with strong thunderstorms, and occurs when a strong updraft carries raindrops up high enough into the atmosphere that they freeze. They sink due to gravity, melt slightly and accrue more moisture, then are pushed back upwards by the updraft to refreeze. This continues until they are too heavy for the updraft to raise, and they then fall to the ground (potentially causing a lot of damage). The largest hailstone on record in the United States was seven inches wide and was nearly the size of a soccer ball.

Thunderstorms dissipate when either the vertical wind blows the cloud apart, or the convection (the warm, moist air rising) weakens sufficiently. The types of thunderstorms that often spawn tornadoes are called supercell thunderstorms, but they’re sufficiently complicated as to warrant their own post later.

This entry was posted in Meteorology and tagged meteorology, thunder storms. Bookmark the permalink.

2 responses to “How Thunderstorms Form”