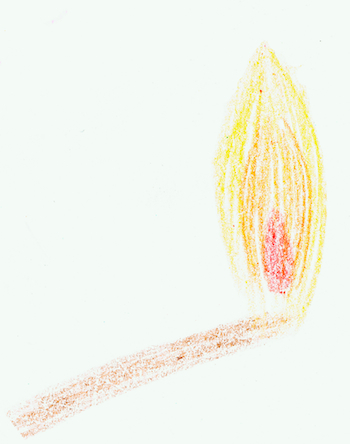 A flame is very much like a dance. On its most elemental level, the dancer’s body and a rhythm combine to form a continuous motion in the presence of music to create a dance. All these components are needed for a dance: if any one of them is missing, the dance disappears into thin air like a blown-out match. Similarly, fuel and oxygen combine in a continuous reaction in the presence of heat to create a flame. Flames dance in harmony with the rhythm of the air currents around it, with the changing proportions of fuel and oxygen and ash, with the ever-changing world around it.

Let’s say that we’re lighting a candle, so the fuel we’re using is wax. Typically, though, we don’t heat the candle until it spontaneously bursts into flame — we light it with a match. Matches use heat from friction generated when the match is struck against a rough surface to burst into flame. When we zoom in and look at the lit candle on a molecular level, we can see the atoms dancing too. When the candle is lit, the heat from the match flame gets the atoms moving and dancing. As the atoms dance more and more, they find new dance partners and form new molecules. This produces heat and energy, which we see (when we zoom back out to see the whole candle) as a flame. Some of the wax is transformed into carbon dioxide and water vapour, some of the wax melts from the heat of the flame before it burns, and the candle stays lit until either the fuel or oxygen runs out, or someone blows out the candle. Blowing out the candle pushes the flame far enough away from the fuel source that the chain reaction stops, and the flame dies.

When we zoom out from the single lit candle and look at how fire has transformed humanity, the metaphor shifts slightly. Rather than the flame being a dance, fire starts to define the dance. With fire, we can cook and preserve food and reduce illness from tainted food. With fire, we can work with metals and make durable tools and structures. With fire, we are not reliant on the sun for a source of light, so we can be productive before sunrise and after sunset. With fire, the rhythms of humanity shift from rhythms limited by forces and resources beyond our control, to rhythms that we manipulate and control.

I’m pleased to note that some other people ran with a more poetic answer than a straight scientific one. Initiatives like this highlight how interpretive science communication can be, and how different starting points and view point can put the same scientific phenomenon in a variety of different lights. Having a variety of viewpoints and perspectives on science helps communicate science to a wider variety of people, since some interpretations won’t resonante as well with some audiences as others. I think the Flame Challenge is a great initiative, and I’m pleased to see that there was a high level of participation both on the submission side and also the judging side. The one criticism I have is that I think audio-video submissions should have their own category, separate from written submissions. Both are powerful modes of communication, but comparing the two is a little like comparing apples and oranges, and having two categories would help highlight exceptional writing and video.

So, readers: how would you explain a flame to an 11-year-old?