No Matter How You Slice It, Printing Objects is Really Nifty

3D printers are revolutionizing the way we make things. The technology is fairly new — most of the technology has been designed and built in the last ten years, though the first 3D printer was built in the mid 1980’s — and is still in it’s infancy. While it’s not generally cost effective to use a 3D printer to make many ordinary items, the technology is very useful for repeatably creating very precise objects, like machine parts. Due to the 3D printer’s flexibility, it may be able to replace a variety of machining tools needed to create parts to maintain industrial machines.

3D printers work much the same way that ordinary printers work: they take digital information of a pattern to be printed, and deposit material on a surface in that pattern. Conventional printers take text and image information and deposit ink on a page, while 3D printers have an extra step. They take a three dimensional digital rendering of the object to be printed (via a computer-assisted design, or CAD, software program), slice it very thinly into parallel sheets, and reproduce the full design sheet by sheet. 3D printers typically use one of two methods: either a thin tube of polymer is used as an ink, or a powdered medium is fused together with a glue that’s distributed like an ink.

The “tube of polymer” method was the first type of 3D printer to be developed, and the analogy between it and 2D printers is very clear. Instead of a liquid ink deposited on a page in thin rows, a nozzle pipes a very thin wire of polymer across the printing bin in parallel rows. The polymer is hot, so it fuses together, creating a three dimensional object. 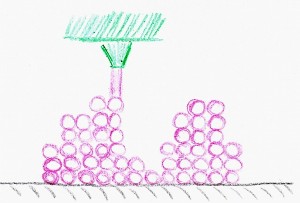 A vertical cross section of a 3D printer in action. The green nozzle head moves into (or out of) the page, piping pinkish-red material in lines. The piped material stacks on top of each other, creating a complex shape. 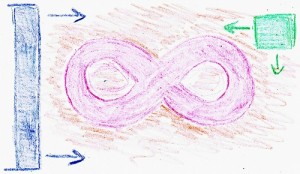 The power in 3D printing lies in the fact that it can create objects with very fine details and intricate structure in ways that conventional manufacturing just can’t. A simple example is that a 3D printer can easily create a hollow sphere without any seams; this is not possible with most conventional manufacturing methods. (The offending seams can be buffed smooth on a conventionally produced object, yes, but the point stands.) Design firms have taken to 3D printing, as it allows models of objects and buildings to be made efficiently, accurately, and very quickly, giving the designer or architect a tangible, persuasive tool to use when pitching ideas to clients. Industry is starting to use 3D printers as well, but the power of 3D printers lies in creating unusual or unique objects for specific tasks, not necessarily mass-producing large amounts of identical objects. There is also a considerable hobbyist community, who build the printers using open source software and a lot of elbow grease.

One intriguing take on a 3D printer is the solar-powered 3D printer developed by Markus Kayser. It’s build to work in a desert, using a lens to focus the Sun’s energy onto the sand, fusing it into glass. The objects it produces have rough surfaces and lack the incredible precision of commercial 3D printers, and the operating conditions are necessarily intense, but it’s an incredible idea for building everyday objects cheaply out of a very abundant (and free!) resource in a very harsh environment.

An even more intriguing idea is the biological 3D printer, which would be able to print out solid human organs like kidneys and livers for use in transplants. There are many more people who need transplants than there are donor organs available (sign your donor card!), so scientists hope that being able to manufacture organs will help more people live longer and better lives. There is already technology that takes a dead organ and washes it of its cells (but retains the organ structure), and then seeds the structure with a sample of the recipient’s cells. These cells then populate the structure, creating a replacement organ for transplant that, since it was made with the recipient’s cells, will not be rejected by the recipient’s immune system. Stomachs, bladders, and most recently a trachea have all been reconstructed in this way, but solid organs are difficult to generate this way because of the dense structure and variety of tissue types needed. 3D printers may hold the answer — the variety of tissues just requires multiple print heads, and the density of cells is less of a hurdle. Lab prototypes are promising — a rat liver has been successfully transplanted into a rat, and a functional human kidney has been created in a lab (though none have been transplanted, yet). It’s a promising field of research, and could have an enormous on transplant wait list times. Here’s a TED talk by Anthony Atala, a leader in the field, which gives a sense of the state of the field (and has a demonstration of his lab printer working on creating a human kidney!).