The Scientists Strike Back

With some notable exceptions, scientists are not generally habitual rabble-rousers, at least not in their capacity as an Official Representative Unit of Science. In my experience, many of them have deep political convictions, and are not shy about sharing them, but going out on the street en masse as scientists (rather than as ordinary citizens) is not a common sight — I can’t remember the last time scientists took to the streets to protest policy. So when a couple thousand of scientists in lab coats and funeral wear converge on Parliament protesting the Death of Evidence, something is going on.

The Death of Evidence protest was organized by some scientists (mainly grad students, I believe) at the University of Ottawa, and was timed to coincide was a very large evolutionary biology and ecology conference in Ottawa to attract more marchers from across the nation. The list of policies that the protest was targeting is long and broad:

The Harper government has embarked on a systematic program to impede and divert the flow of scientific information to Canadians through two major strategies. The first involves the gutting of programs and institutions whose principal mandate is the collection of scientific evidence. Examples of this include:

Mr. Harper’s second strategy is perhaps less overt, but even more insidious: to impede the bringing forward of scientific evidence into the public debate. Examples:

This is beyond death by a thousand papercuts: this is more like death by hundreds of axe wounds. I’m not saying that every federally-funded science initiative needs to be funded in perpetuity without any evidence (there’s that word again!) that it’s viable and productive research. I am saying that when multiple scientifically flourishing initiatives are having their funding unceremoniously ended, with no credible evidence presented to back up that decision, things start to fail the sniff test.

Many of the initiatives on the list have been wildly successful. The Arctic ozone monitoring program at PEARL provides data to climate scientists around the world, and since the polar regions are particularly sensitive to ozone depletion, it’s not data that can be reasonably interpolated from more southernly regions. The Experimental Lakes program was literally unique — there are no other research facilities like it in the world, and the ecological science that came out of the project was robust and very highly regarded. Multiple departments (most notably Environment Canada and Fisheries and Oceans) have been told to fire hundreds of scientists. Science is extremely collaborative — the people those fired scientists worked with will have to massively restructure (and likely scale back) their research activities. Taking out one person doesn’t affect just that person’s work — it affects all the people they work closely with too.

Notice too the type of research that’s getting most publicly slashed. It’s not engineering research, or physics research (though other than the Higgs and dark matter businesses from last week, physics research very rarely makes the news): it’s environmental sciences, health science, biology. The types of science that can be used to make a lot of money very quickly aren’t being touched at all: in fact, the money allocated to Tri-Council research grants with explicit business connections has increased. This is at the same time that the Tri-Council budgets are being slashed, with fewer and smaller grants available to a desperately underfunded (or wrongly-funded) academic system bulging with MSc and PhD’s in the making.

Coupled with those financial attacks is the ongoing restrictions and sanctions that federal scientists face regarding discussing their work not only with the public, but often with their scientific communities. Scientists who work at Environment Canada, Natural Resources, and Fisheries and Oceans have been explicitly forbidden to talk to the public about their research in any way without it first being vetted by administrators. Aside from being alarmingly draconian policy, this runs counter to the spirit of science. Science is about evidence, and looking at that evidence with as few biases as possible, and examining what the evidence says. Scuttling evidence that doesn’t mesh with your worldview gets scientists publicly shamed and (rightfully) professionally blackballed. But politics trade in image and perception, not objective evidence, and the two are fundamentally incompatible. They’ve cut the means by which we get information, and have hobbled scientists’ ability to effectively carry out their work. Sure, sometimes the funding is only stopped for a year, like with Genome Canada, but research isn’t a tap: you can’t turn it back on full blast after you’ve turned it off for a year. People still need to pay their bills, so they look for work elsewhere — and often leave the country. Research winds down, labs scale back, projects get shelved. That doesn’t all magically reappear a year later when some funding gets reinstated. Science, especially environmental science, relies on continuous monitoring and funding, and knocking out small parts of the puzzle (like PEARL) has wide-ranging effects far beyond the individual scuttled project.

I’m not surprised that it’s come to this, and I’d wager that there will be more protests, demonstrations, and visibly politically active and angry scientists in the streets in the coming months. Young scientists face an academic world with vanishingly few tenure-track positions available, and the few who get them are under enormous pressure to succeed. The majority of students in graduate programs will find employment outside of academia, and many struggle to find employment opportunities relevant to their expertise. Public sector research at places like Environment Canada is a natural alternative to university-based research, so aside from ideological or scientific qualms that young scientists have about the funding cuts, the pool of jobs they can expect to be able to apply to upon graduation is rapidly shrinking in new ways. Industry is often a poor match to academic scientists; for instance, there is absolutely no conceivable industrial use for the research I did for my MSc. Were I to look for a job based on that work, in this economic environment, I would be looking for a very long time. Public sector or university-based research would be my only remotely viable options, if I’d wanted to pursue that train of research (which I didn’t, partially because of my extremely limited employment options).

This is a nation that is increasingly disillusioned with our government. Our utter lack of environmental stewardship and leadership has made us into an international laughing stock at meetings like Bali and Copenhagen. The muzzling was the last straw: funding squabbles are nothing new, but overtly silencing federally administered evidence-based research is, and that is completely unacceptable to any scientist worth their salt. It’s no different from fudging your data, deliberately omitting results, or grossly mispresenting your conclusions: it’s bad science, and the perpetator should carry a professional black mark. This government is no different. 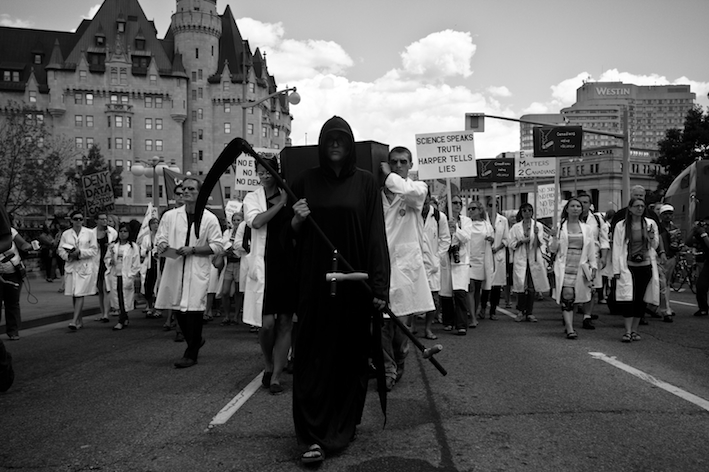 This entry was posted in In the News, Politics and Policy, Science and Society and tagged conservative party of canada, death of evidence, funeral for evidence-based decision making, lab coat protest, muzzling scientists, science protest. Bookmark the permalink.

One response to “The Scientists Strike Back”