It’s Been A Busy Week For Space News

In the past week, there’ve been four major announcements from various space exploration missions. Messenger found solid water ice on the surface of Mercury, Voyager 1 has not left the solar system like initially thought, and the structure of the heliosphere is different than what we thought, Curiosity found organic molecules on the surface of Mars, and NASA is sending another rover to Mars in 2020. That’s a lot of big news for one week! This post covers the Messenger and Voyager announcements, and the next post (coming soon!) covers the two Martian announcements.

Out of all of these announcements, this is the one that astounds me. Mercury is the innermost planet, sitting in an eccentric orbit (ie, the orbit is shaped like an ellipse rather than a circle) 0.30 to 0.46 AU from the Sun, and it is also very small. It has virtually no atmosphere, since it doesn’t have much gravity to hold one in place, and the solar wind pushes gases off the planet. Because it has such a thin (and highly variable) atmosphere, there’s little insulation on the planet, and the temperature varies wildly from day (~700 K at the equator, ~550 K near the poles) to night (~100 K near the equator, ~50K near the poles). This is not planet where one’d expect to find what amount to glaciers! But there are two things that make solid surface ice possible: the presence of craters, and the planet’s spin. 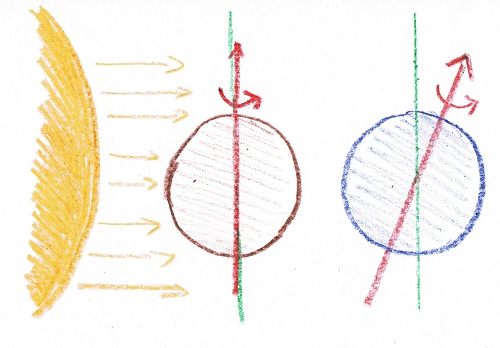 Spin axes of Mercury (left) and Earth (right). Poles on Mercury do not experience the relatively extreme seasonal shifts in light that Earth’s poles do.

Like any rocky planet, the surface of Mercury is not smooth, and there are craters and canyons from impacts with asteroids and comets. These craters can have steep, deep walls, which act as sunshades for the bottom of the crater. Additionally, Mercury is a very upright planet — the axis around which it rotates is nearly vertical. This means that in the polar regions, there are regions at the bottom of craters and cayons that never see direct sunlight. Because the surface temperature is so strongly dependent on incoming heat from the sun (ie, when the sun goes down, the temperatures fall ~600 degrees), the bottoms of these canyons stay cold (often ~120 K).

Shadow line due to lip of the crater. At the poles, sunlight comes in at a much more oblique angle; the angle is exaggerated here since picture is not to scale. Region shaded in blue is shaded by the lip of the crater, and remains cold.

When Mercury is hit with comets or asteroids, the impact deposits not only the rocky material, but often frozen ice and volatile compounds, including carbon compounds. (Note that most carbon compounds are called “organic” — this does not mean that they were created by living organisms, or are indicative of the presence of organisms.) The ice and other volatiles migrate around the planet, vapourizing in the hot regions and condensing out in the cold, and some of the material winds up in the polar regions; material that lands in the cold patches sticks around. Additionally, the organics and non-water volatiles can act as a blanket in the transition regions, where it’s cold, but it’s not quite cold enough (or consistently enough) to sustain surface ice. In these regions, the volatiles protect a layer of ice that sits just below the surface.

NASA confirmed this with a variety of instruments. Messenger mapped the topography of the polar regions of Mercury to high precision, which allows NASA to calculate which craters have cold bottoms. The reflectivity of the surface was mapped; since ice reflects a lot of light, bright spots at the poles are evidence of solid surface ice. In contrast, organic material has a very low reflectivity, and shows up dark. The bottom of several of the polar craters had a large dark area with a smaller bright patch hugging the crater wall, which is exactly what you’d expect to see if ice and organic material were forming what amount to glaciers on the surface of Mercury. The evidence is further confirmed by the signature of hydrogen in the neutron background of the planet. A background field of neutrons is present around planets, due to interactions between the material of the planet and cosmic rays. As cosmic rays hit the surface of the planet, they interact with the material of the planet (often penetrating below the surface), and neutrons are released in the reactions. These neutrons bounce around and out of the surface, and can be detected from an orbitting spacecraft. Hydrogen (bound in water) is a very good absorber of neutrons, so patches where few neutrons are detected are regions where hydrogen (water, or ice) is likely to be found. Messenger found dark spots (so indications of high hydrogen concentrations) in the same places where the reflectivity was high and the surface temperature was consistently cold. Adding this all up means that there is frozen water in the polar regions on the surface of Mercury!

Voyagers 1 and 2 were launched way back in 1977, and have been slowly and steadily making their way to the outer edge of the solar system. (These are the spacecraft with the golden records, etched with samples of images and sounds of life on Earth, compiled by a committee headed by Carl Sagan.) Both Voyagers passed by Jupiter in 1979 and Saturn in 1980, and Voyager 2 passed by Uranus and Neptune in 1986 and 1989 respectively (Voyager 1 missed both planets); they’ve been drifting out of the solar system for the past 23 years.

There is a boundary between the heliosphere (which is the region where there is a solar wind, or a field of charged particles emitted by the Sun) and outer space (perhaps better called interstellar space), and earlier this year, there were indications that Voyager 1 was pretty much at what we thought that boundary was. Previously, this is what we thought the edge of the heliosphere looked like: 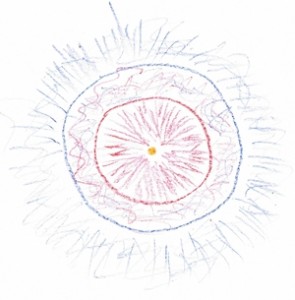 Solar wind zips along at 400 km/s, but it slows when it starts to interact with the interstellar medium (ie, outer space). As the wind interacts more and more with the interstellar medium, the wind slows down. The point where it slows to below the speed of sound is called the termination shock, and it marks the beginning of the edge of the heliosphere. Voyager 1 passed it in December 2004, and Voyager 2 in May 2006. The region between the termination shock and the heliopause (ie, the border between the heliosphere and outer space, or the outermost edge of the solar system) is the heliosheath, and it’s a region where the solar wind interacts strongly with the interstellar medium, and becomes turbulent. Voyager detected all this as expected, and reported in 2010 that the solar wind had no more outward velocity, that is, the particles were not pushing outwards towards outer space, but were moving around laterally. This isn’t the edge of the heliosphere, since there are still particles of solar origin: they’re just not (collectively) moving outwards anymore.

What NASA expected to see was as the charged particles of solar origin dropped off, the cosmic rays form interstellar space would increase. The particle data from Voyager 1 shows this pattern: there are extremely well defined sharp dips in the amount of solar particles which correlate to increases in the number of detected cosmic rays, and then there’s a sharp, longer, drop-off in solar particles. 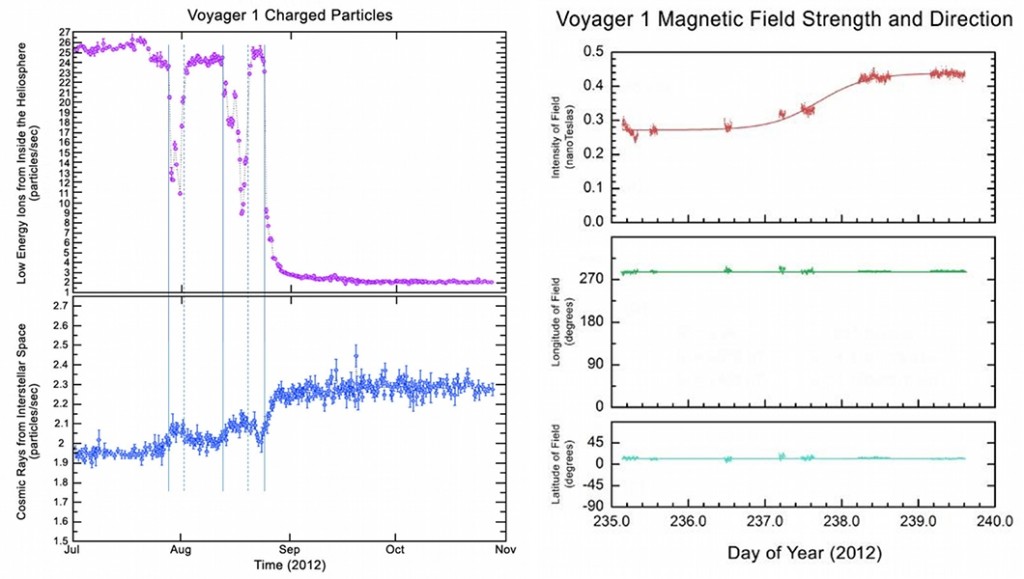 Voyager is the first object to reach the edge of the heliosphere, and scientists suspect that this is the last stage before it finally exits the heliosphere all together, probably some time in the next year or two. But this magnetic highway stage wasn’t anticipated, so who knows what other surprises Voyager has in store for us!